Let me preface by saying publishing this is not easy. I am making myself vulnerable to mommy-shamers and attackers, but ultimately, I feel like sharing my story will prove therapeutic and I hope to inspire and encourage other women during a time when they are left feeling so defenseless. 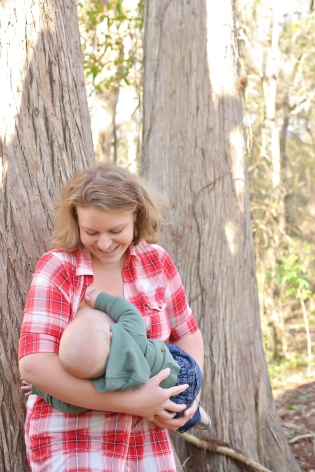 Nursing my son has been the most challenging period in my life. Seriously, it is the most difficult thing I have ever done, even more difficult than the 36 hours I spent in labor working to bring him into this world. At times, I could argue that it has even been as painful. Only because labor pain is temporary but breastfeeding goes on for months and months and months.

Konnor was born at 10:15am on a Tuesday morning. My labor and delivery was long, scary and very difficult (that’s another story entirely,) but I knew everything would be okay when my baby was finally placed on my chest and we could all relax. I put him to my nipple and he latched almost immediately. I was so proud. I was producing colostrum and he was eating. I’m not going to lie, that first latch was incredibly awkward and strange feeling. I had a lactation consultant visit me in the hospital. She showed me how to use a nipple shield. She showed me a couple of tricks to make baby Konnor open his mouth wide and get a deep latch. I was clueless. I welcomed her advice.

Once Konnor and I got to go home I continued to breastfeed. As the days went on it got more painful. I dismissed the pain at first because the advice I received from so many moms is that breastfeeding hurts in the beginning. Your nipples need to toughen up. Your milk is coming in. You are engorged. Pain is normal. The problem is, I didn’t realize when “the beginning” was over. I went on for about a month of intense pain while nursing. I would often use a nipple shield, but that didn’t seem to help. It hurt so bad I would sit in tears while nursing my son, tense from the pain, breathing like I learned in my prenatal yoga class because that’s how bad I hurt. I started asking around, “when does it get better?” “Soon” was the answer I repeatedly got.

Frustrated, I went to another lactation consultant. She told me Konnor’s latch looked good and he was growing and ingesting milk. She showed me some easier ways to hold him while nursing and sent me on my way. A few more weeks passed and I went to see her again. I got the same story, so I went home, somehow convincing myself that this was still just temporary. Strangely, the pain was not constant. Sometimes I would go a week without any pain while nursing, so I began to think that it was caused by something I was doing wrong.

The crazy thing is, I’m not crazy for continuing to nurse even though it made me so uncomfortable. Konnor loves to nurse. He latches and sucks like a champ. I can feel him relax as soon as I hold him to my breast. It is the only thing that comforts him when he is sick, or scared, or nervous, or gassy, or in pain. Plus, I know my milk is full of antibodies. And after my sister struggled with supply and could not nurse her baby even though she desperately wanted to, I somehow felt guilty knowing that I had the milk to provide for my son, but wanted to give up because it hurt. That seemed silly. So many women would do anything to have enough milk for their child, so I nursed on.

I had a house call from another lactation consultant shortly before I went back to work. I wanted to get this resolved before it was time for me to switch him to eating the majority of his meals from a bottle at daycare. I was desperate to enjoy nursing my son. I wanted the experience my mother, mother-in-law, and friends told me I would have. I wanted to feel relaxed and happy while bonding with my son in the most intimate way possible.

This lactation consultant told me something different from all the rest. She told me Konnor had a tongue tie and a lip tie. I didn’t believe her at first, because from what I could see, the “tongue tie” diagnosis was a trend. How could she be the only person who saw this as a possibility? She recommended I take Konnor to a speech specialist to confirm the issue. So I did. We worked on exercises to stretch his mouth muscles for weeks, but the pain continued.

The week of Thanksgiving, I took my three-month-old to a specialist to have a tongue tie revision. We drove two hours away so we could have the LASER procedure performed by a specialist with a great reputation. A month later, the pain while nursing was gone. I breastfed my son without any pain.

This incredible, emotional, beautiful period lasted about two weeks. Then, the pain returned. One thing I failed to mention is that when I returned to work, I had to resort to using a breast pump 80% of the time. I pumped all week and only nursed on weekends. This transition from nursing to pumping was incredibly emotional and exhausting. But I remained determined. At this point, Konnor was four months old and I wanted to make it to six months exclusively breastfeeding.

The pump caused a whole new round of issues. My Medela PISA gives me serious blisters. The suction causes huge bubbles to form on my nipples. Then they pop. Imagine having a killer blister on your foot and then cramming it into a wet shoe that’s three sizes too small for you. That’s how I feel every time I pump. I worked with a lactation consultant to figure out the correct flange size, the correct flange brand. I tried a different pump, the Spectra S2. I attempted to use a hand pump and hand-express. I picked up every breastfeeding accessory in existence trying to make this work. Not to mention, I have to pump at work, which is incredibly stressful. It is nearly impossible for me to get my job done each day and also find time to pump.

One other issue, I make enough milk for Konnor each day, but just barely. When I returned to work, I started struggling with supply. I went from nursing every two hours around the clock, to pumping every four to six hours for just 15 minutes at a time. This is a challenge.

Why does nursing and pumping cause me so much pain? My theory is that it is a combination of my son never forming a correct latch because of a tongue tie that wasn’t diagnosed early enough, and nipples that are incredibly sensitive to the cold, plastic suction of the pump. At six months post-partum my lactation consultants and I have not been able to figure it out. I mostly pump now, but I still occasionally latch him on too.

Why don’t I give up? The week of Christmas Konnor developed RSV. I am convinced the only reason he did not develop serious complications from it is because of my breastmilk. But more important than the scientific reasons I give my son breastmilk is the emotional attachment. I love my son more than I ever thought possible. It is a love so deep, it physically hurts to be away from him. And if you could see his face and feel his heart when he latches onto me, when his eyes meet mine, when he begins to eat, you would understand. Despite all of the pain it is worth it. He is worth it.

I celebrated six months of breastfeeding last week. Konnor eats some solid foods now, so I’ve decided that I am okay with slowly weening him off of breastmilk and transitioning to mostly formula.

To any mothers who read through this and feel like they can’t do it any longer. Don’t give up. I can’t promise you that it will get better, but I can promise you that it is worth it. My advice: talk with experts, get second opinions, get third opinions, get fourth opinions, pray, cross your fingers, don’t feel bad if you have to supplement with formula, pump instead of nursing if it works better, don’t be mommy-shamed. But most of all: BREASTFEED ON MAMA! You got this!

6 thoughts on “Battles with Breastfeeding”