Fact: Millions of people are playing Pokemon Go.
Fact: They look really silly walking around staring at their phones.
Fact: It is a huge waste of time that could be spent on more important issues.

False: Families are spending even less time together because they are too busy playing.
False: People are so busy staring at their screens that they miss the world around them.
False: Its just another game eating children’s brains and has no educational value.

The title of this post is meant to be a joke,  but there is some truth to it. I regularly walk a 3-mile loop through my neighborhood. Usually, I pass a few kids on skateboards, a couple of neighbors walking their dogs and a handful of fit adults jogging in fancy workout clothes. This past week I observed something different. I passed crowds of children huddled together, I saw fathers out with their sons and daughters laughing and squealing as they walked down the sidewalk, I was almost run over by teenagers hurrying down the street on bicycles. They all had one thing in common: They were staring at their phones, hunting Pokemon. 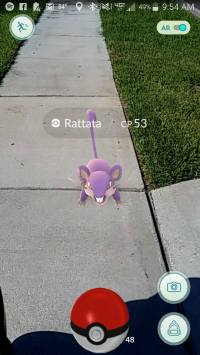 I’m making assumptions here, but based on my previous excursions through the neighborhood I doubt the father who I saw being dragged down the street by two little girls regularly walks with his children. They were, without a doubt, discussing the Pokemon that was being chased down by an older boy walking in front of them. Sure, this isn’t exactly meaningful conversation, but I am betting that during the discussion of weedles and lures the father had an opportunity to talk to his children about their day at school, or if not, at least they are bonding over something.

The pedestrian traffic picked up as I got closer to the busiest Pokemon stop in the neighborhood. The biggest observation I made is the diversity of players. Old, young, black, white it doesn’t matter. Pokemon does not discriminate. I saw groups of teenagers, who I’d bet rarely acknowledge each other on a typical day, hanging out in the same spot asking each other about what they caught. They were all united.

So, in this dark and depressing time in American history, lets not bash the Pokemon Go players. Instead, lets learn a thing or two from them. If we can unite over fictional Japanese anime creatures, then surely we can unite over the more pressing issues.